The second wave of the Covid-19 pandemic has ravaged India. Everyone has heard and seen stories of pain, distress and agony in the past three months.

There are also numbers that attest to these stories – nearly 300,000 Covid deaths, according to the government figures. The Economist magazine, using a proprietary ‘excess deaths model’ estimates roughly a million Covid-19 deaths in India just this year in 2021. The New York Times says it consulted with ‘dozens of experts’ and estimates 1.6 million Covid-19 deaths in India. There are other ongoing efforts in trying to estimate the truer impact of the pandemic in the country. It is very difficult to come up with an accurate number for Indians who have succumbed to the novel coronavirus. No one truly knows what the real extent of Covid damage has been on Indians and their families.

But the impact of Covid-19 is a personal story for millions of Indians. They have, perhaps, lost someone in their family or their village to Covid. To what extent has Covid personally impacted families in India?

Prashnam decided to find out this week. We asked Indians in rural areas if they have personally lost a person in their family or a neighbour to Covid-19.

We picked six large Hindi-speaking states. Out of the 1,256 assembly constituencies in these six states, we identified 967 rural constituencies (as defined by Census). Prashnam picked people across many villages in these constituencies using scientific, randomised and stratified sampling techniques.

Respondent profile: 14,881 adult Indians responded to this survey. They were from six states – Bihar, Haryana, Jharkhand, Madhya Pradesh, Rajasthan, Uttar Pradesh, belonging to 229 districts. 70 per cent were male and 30 per cent female. 52 per cent were youth (60).

We asked two questions to these people in Hindi.

Q1: Have you lost anyone in your family or village to coronavirus in the last 3 months?

Q2: Who do you think is responsible for your loss? (Asked only to those people who said they have lost someone)

Some of the all India sero surveys undertaken by CSIR to estimate prevalence of antibodies used a sample size of 10,000 people across the country. Similar surveys in other countries use a sample size of two to three thousand for the entire country.  This Prashnam survey of nearly 15,000 people in just six states, covering every rural assembly constituency, is a unique survey conducted in India.

One in six lost someone to Covid-19

Seventeen per cent of people surveyed reported that they had lost someone to Covid-19. These six states have roughly 100 million families. The survey showed that at least one person in every six of these families had lost someone to Covid-19. But this does not mean 17 million (17 per cent of 100 million families) people have died. Statistically, when these results are extrapolated to the entire population, there will be overlaps and double counting. Hence, one cannot induce from these results that 17 million have died in these six states.

To put these findings in context, a similar survey in the US conducted by the University of Chicago in March 2021 showed that 19 per cent of Americans had a close friend or relative die from Covid-19. The survey results of the US are very similar to what we have found in India, roughly the same percentage of people say they have lost someone in their immediate family.

Which means if one assumes that the US reported Covid-19 deaths more accurately than India, then the true Covid death rate in India should be similar to America’s. 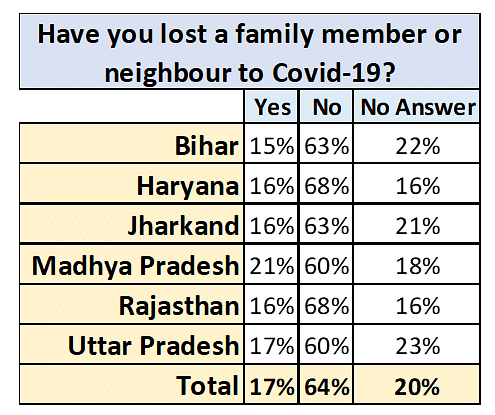 It is interesting that nearly every state has reported roughly similar numbers except Madhya Pradesh where the toll seems to be higher.

Those who suffered a personal loss due to Covid-19 primarily blamed the Narendra Modi government for their loss. But an almost equal number also blamed their destiny. There was wide state-wise variability in responses. But largely, state governments were not held as responsible for this catastrophe as the central government or ‘fate’ were.

People in Uttar Pradesh blamed Modi sarkar for their loss while those in Haryana and Rajasthan blamed it on their fate. 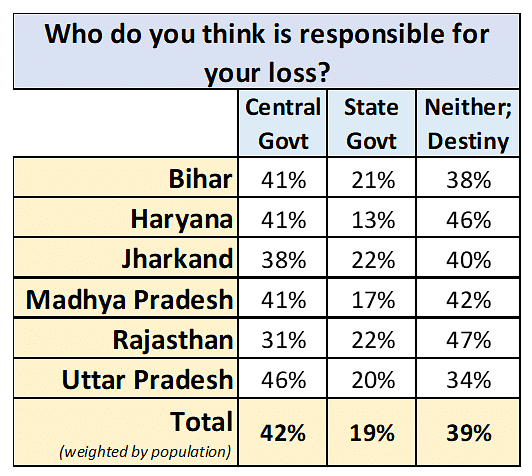 Prashnam, in keeping with its principles of transparency and integrity, makes available the entire raw data of this survey here for analysts and researchers to verify and analyze further.

The article is part of ThePrint-Prashnam Vox Pop series.

Why news media is in crisis & How you can fix it

But the news media is in a crisis of its own. There have been brutal layoffs and pay-cuts. The best of journalism is shrinking, yielding to crude prime-time spectacle.

ThePrint has the finest young reporters, columnists and editors working for it. Sustaining journalism of this quality needs smart and thinking people like you to pay for it. Whether you live in India or overseas, you can do it here.