Personal Protective Equipment has been designed with the primary focus to reduce injuries. Safe to Work speaks with Australian experts about the evolution and importance of PPE in mine sites.

Mining companies are sure-footed in protecting their workforce from eye injuries.

Kevin Webster, who has worked at six different mine sites, testifies that each mining company imposes strict guidelines to protect the eyesight of workers.

Mine operators weigh a worker’s adherence to site rules more heavily than the credentials of the worker – such is the heightened attention on eye protection in the workplace, according to Webster.

“It doesn’t matter how good your work is. If you keep breaking the rules, you won’t work there for very long,”  he says.

“I know what mines really want: (for you to) be as safe as possible and go home at the end of the day.”

Bollé Safety territory manager – New South Wales, Adam Martin has observed the leadership in setting a high standard when it comes to eye protection in the mining industry.

After decades of experience in the personal protective equipment (PPE) manufacturing and mining sectors, Martin says the mining industry has developed significantly from a safety perspective.

“Back then when I started in the steel industry, PPE was still in its infancy. Its use wasn’t mandated back in the 1980s and 1990s. The industry has come a long, long way, and the mining sector has certainly helped drive that,” Martin, a boilermaker by trade, tells Safe to Work.

“A lot of workplace eye injuries today are caused by people wearing the incorrect PPE for the tasks they are doing, or they are just not wearing them.

“And there are many reasons for not wearing PPE: they either find it uncomfortable, they find it unsuitable for the task, or they just don’t like it.”

The result of this are the seemingly insignificant events that Webster sees at mine sites, such as the flicking up of a worker’s glasses when they fog, or not wearing gloves when they should be worn. They are potentially a precursor to the biggest accidents in the workplace, he says.

Like Webster, Martin believes an employer can only do so much in supplying their workers with the correct PPE for their job, but it is the latter’s decision to look after themselves.

“At the end of the day, safety in mining goes back to the individual,” Martin says.

“Businesses can put forward safety policies and build PPE matrixes where they identify the risks associated with a task and the products that are suitable to be worn for that task. But it comes down to the individuals to look at those matrixes actively and wear the correct PPE.”

Webster himself was involved in a real-life accident that nearly cost him his eye.

While working at a maintenance workshop in New South Wales, he tripped and landed face down on a piece of bent up steel.

“I received my eye injury at work when our overhead crane became locked after a limiter switch was hit. In the process of unlocking the crane, I needed to get the control box for the crane, which hangs down on a cable via a sliding rail,” he recalls.

“This control box was just slightly out of reach from where I was standing, so I needed to walk around a ladder and some folded platforms on the ground to reach it properly. 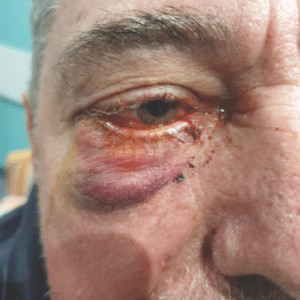 “While walking around these, my foot got caught on the corner of the ladder and I fell down eye first into the corner of the platforms. Luckily, I was wearing my prescription safety glasses, which took some impact from the fall.

“But I did receive severe damage to my eye and needed surgery. The main damage to my eye was a small laceration in the lower part of the white of the eye, which was stitched in surgery by Dr Kaushik.

“If I didn’t have those glasses on, I wouldn’t have had an eye.”

Shweta Kaushik, a fellow of the Royal Australian and New Zealand College of Ophtalmologists, says Webster was lucky his glasses lens didn’t shatter.

“I understand they were high-quality impact glasses. Otherwise, to be perfectly honest with you, that morning I would have been repairing (Webster’s) eye or tear duct, and he would have had significant visual impairment,” she says.

According to Kaushik, wearing safety glasses can reduce the risk of eye injuries by 50–90 per cent – a huge reduction in risks that warrant proper use of PPE.

She says a vast majority of eye injuries are caused by metal foreign bodies that enter the eye, rendering simple safety glasses ineffective.

“You need actual goggles or a face shield,” she says.

While glasses and goggles provide protection against chemical burn and small particles and irritants, frames and lenses that meet minimum lens dimension requirements of AS/NZS 1337.1 are recommended for protection against penetrating eye injuries.

For example, Bollé Safety’s popular Rush+ specs have been tested and approved to these standards for medium impact protection.

“Our eyewear is very well accepted. It’s comfortable and people trust it. And that is a crucial part of selecting an eyewear – that it meets all Australian Standards and suitable for the job you’re doing,” Martin says.

“It’s only when users are fatigued that they start removing things, like goggles that are getting heavy and uncomfortable, and they substitute them for something else that isn’t right for the job.

“So, we’ve brought a lighter weight and durable product in our goggles range that people can wea
r for longer and keep them on.”

Bollé Safety’s product innovation is driven by users who are looking for safety eyewear that is the right fit.

Similar to the trend of respirator fit testing, mining companies are looking for eyewear that fits users, with minimal gaps around the lenses.

In response, Bollé Safety has developed a range of eyewear that brings out improved seals, so they fit comfortably around the face and keep foreign bodies out.

“We’ve introduced another product called the Ultim8 that has a thermoplastic rubber (TPR) foam around it, so it’s similar to swimming goggles in the way it seals around your face,” Martin says.

“We pursue that kind of innovation to reduce the possibility of any foreign body entering the eye.

“Even with our goggles, we are looking at new designs to provide a wrap-around fit. 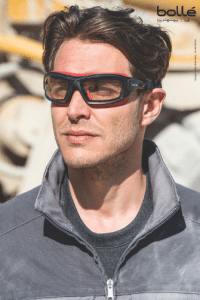 “Our 180 goggles have fantastic panoramic 180-degree vision because what we don’t want to do is compete with the wearer’s vision – if you can’t see what’s around you, you may not be alert to a danger.

“The last thing we want to do is for PPE implementation to introduce another risk.”

Even so, PPE remains the last line of defence and in the hierarchy of control in the workplace.

Kaushik says mining operators can change processes that are concerning or put barriers in place to protect workers against any exposure that could lead to an eye injury.

While mining companies put controls in place to prevent accidents from happening, the role of PPE, in this case, is not to prevent injury.

As Martin explains, mine workers need to be aware of all the safety risks as wearing PPE only reduces the likelihood of injury.

“People have the perception that when they’re wearing PPE, they’re protected, however protection can only be achieved once the risks have been assessed and the most appropriate PPE has been selected for the task,” Martin concludes.

This article also appears in the Nov-Dec issue of Safe to Work.

Read More:An eye for (the safety of) eyes in mining – Safe To Work