Several U.S. companies that won almost half a billion dollars in government contracts to make hospital gowns appear to have too few workers and not enough factory space to complete the job when the awards were made, according to a Bloomberg Law analysis.

Many of the contractors have scaled up their staffing and factory space since they got the awards in September.

Doctors and nurses are concerned about protecting themselves as the U.S. faces a winter surge in infections that could rival the worst days of a pandemic that already has killed 228,000 Americans. In the early months of Covid-19’s spread, personal protective equipment (PPE) shortages abounded in places with high caseloads, prompting the government to seek ways to bolster its reserve supply of emergency medical supplies.

Public records show that one prime contractor that received a $1.6 million award to provide 128,000 gowns has a single employee headquartered in what appears to be a home in Dallas. That person didn’t respond to multiple requests for comment.

Just eight of the 15 primary contractors answered Bloomberg Law’s requests for comment. They offered a variety of explanations for how they’re fulfilling their orders, including by securing help from nonprofits or money from friends and family members to scale up operations.

Federal law sets strict conditions on Defense Department contracts: All military fabrics must be made entirely within the U.S. But much of textile industry has moved overseas, limiting the number of U.S.-based manufacturers that have experience fulfilling a contract of such a size. Much of the U.S.-based industry, including new PPE manufacturers, bid on the contract, according to Defense Department data.

Some established contractors and textile manufacturers won awards, such as Dow Chemical Co., Shawmut Corp., and LA Brands LLC. Others were much newer. Health Supply US was established in March, and subcontractor QT Sewing Factory was incorporated in November 2019.

At least 11 contractors and subcontractors began making protective gear only after the pandemic began, according to press releases and news reports. Of the 15 primary contractors, eight had never received a federal contract prior to 2020, according to federal government contracting records.

The Defense Department hasn’t seen evidence that any of the awardees don’t have the financial capability to fulfill their obligations or that they’re using foreign-made materials, Defense Logistics Agency spokesperson Michelle McCaskill said in a statement to Bloomberg Law. “Some new entrants are still ramping up but none of the challenges they are experiencing are beyond what we would expect to see, and DLA maintains close communications with and oversight of the vendors.”

Competitors in the industry are skeptical. Making 88 million gowns by the end of February takes “thousands and thousands of workers,” said Bill Amos, chief executive officer of Salem, Ore.-based apparel manufacturer NW Alpine Gear LLC, who unsuccessfully bid on an earlier version of the contract. “Ramping up from delivering zero to delivering hundreds of millions of gowns in three months is impossible,” he said.

Members of Congress are also raising questions. “Some of those contracts have been to companies that have very little experience with producing that kind of equipment, that the standards have not always been up to par, and it’s created some real challenges,” Sen. Jeanne Shaheen (D-N.H.), said during a Senate Armed Services committee hearing Oct 1.

Ellen Lord, undersecretary of defense for acquisition and sustainment, replied that the Defense Department “went through a very rigorous process” to award the contracts, and an interagency group spent an “enormous amount of time” making sure “that very stringent criteria were met and adhered to.”

The contracts were awarded to the manufacturers that quoted the lowest price and attested they could meet the requirements for making the gowns, according to the DLA.

That procurement strategy didn’t take into account a company’s experience in federal contracting or in making gowns, according to former Navy contracting officer Jeff Cuskey. Not considering past performance “interjects significant contract schedule and performance risk,” he said.

Cuskey is now an independent consultant and expert witness on defense contracting and procurement and widely known in the field. He represented one company that bid unsuccessfully on a gown contract. He said the Defense Department can deploy other strategies that take into account more factors than price, but it didn’t do so this time. The DLA’s use of the lowest price criteria for selecting contractors “had inherent risks given the critical application” of these gowns for health-care workers, he said.

Wholesale costs for a U.S.-made reusable gowns typically range from $12 to $20 apiece, according to Brenna Schneider, chief executive officer of apparel manufacturer 99 Degrees Custom, who also unsuccessfully bid on the contract.

Contract winners bid at the lower end of that price range. For example, New York Embroidery Studio said its reusable gowns would cost only $7.88 each. The other four reusable gown awardees charged $9.99 to $12.55 per gown.

Health Supply US modified its gown design by reducing the number of seams and cuts, among other factors, to lower the price, chief executive officer Chris Garcia said in an interview.

A consortium of six trade groups, led by the National Council of Textile Organizations, sent letters to the Defense Department raising concerns that some awardees may be using materials or labor from outside the U.S.

In response, the Defense Department said the manufacturers self-certified that they are producing the gowns domestically. The department also is requiring awardees to submit invoices for all materials to confirm compliance, it said in an attestation to the Congressional Research Service obtained by Bloomberg Law.

The Defense Department is “being extremely thorough on this, more than I’ve ever seen,” Jason Maddox, CEO of California-incorporated and Texas-based Maddox Defense, said in an interview. 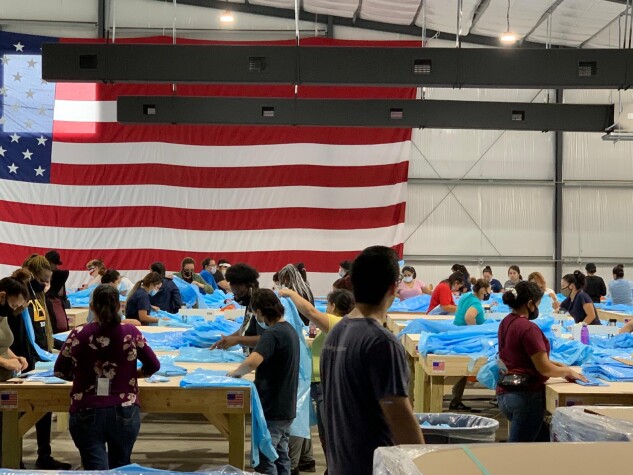 At least 12 awardees weren’t visited by inspectors until after their contracts were finalized, according to executives at those comp
anies. The DOD attestation confirmed all of the facilities were visited after the awards were made. “Site visits are not normally conducted as part of the selection process,” McCaskill, the DLA spokesperson, said.

Feinberg and Maddox each confirmed separately to Bloomberg Law that Defense Department officials visited their company’s facilities before and after they got contracts.