When the UK government issued a desperate plea for British manufacturers to tackle a shortfall of urgently needed personal protective equipment for health staff as Covid-19 hit, James Eden answered the call.

His clothing company, Private White VC, borrowed money for a new factory to make face masks and switched its lines to make hospital gowns, hiring dozens of staff, as the government announced it was aiming to source 70 per cent of its PPE domestically.

But at the same time, ministers were awarding companies or middlemen with no prior experience in the field lucrative contracts to import the much needed equipment, often at inflated prices, creating a stockpile that has left nascent domestic producers without a market.

Months later, big PPE contracts signed with manufacturers earlier this year are being run down with no sign of renewal — leaving some company executives fearing that a manufacturing revival has been strangled almost at birth.

“There is a bit of anxiety and uncertainty,” said Mr Eden, whose operation normally makes luxury clothing. “We invested a huge amount.”

He explained how he rented a disused mill in Glossop, near Manchester, installed a production line and recruited 100 people to make surgical masks. His original factory in Salford has been turning out disposable gowns.

But the six month contracts for both are almost finished and he has yet to hear if they will be extended.

“It would be sensible to keep a network of domestic makers to future proof us for the next pandemic,” he added.

Doubts over the government’s commitment to domestic manufacturers have also been raised by the placing of a new time limit on the 70 per cent commitment for home grown suppliers with the pledge now expected to end in March.

An executive at one UK manufacturer who asked not to be named said he recently had to let go dozens of people hired to fulfil a government PPE order now completed.

“At the moment no one is getting any orders because they’ve got so bloody much,” the executive said.

Meanwhile, Wearwell, a company in Staffordshire with 50 employees that makes industrial work garments, spent about £100,000 on new equipment and took on additional staff to make disposable hospital gowns.

For three months it was producing 10,000 a week for nearby hospitals, but after the contract expired the local trust was prevented from buying more because it had to go through centralised NHS procurement, according to marketing director Ross Gard.

“We’re sitting with a factory with nobody in it,” said Mr Gard. “Nothing is being produced.”

Wearwell charges £5 per gown, whereas he estimated a Chinese-made import costs £2.

Concerns over the way the government procured PPE at the height of the pandemic have been raised in recent weeks by the publication of two damning reports last month from the UK parliamentary watchdog, the National Audit Office.

In one report it found that there was a priority route for suppliers referred by MPs, ministers and their friends. Companies in this category were 10 times more likely to get a contract.

In the second, the NAO found that between February and July the government spent £12.5bn on 32bn items of PPE — which would have cost just £2.5bn at 2019 prices. Of that, 195m items were potentially unsuitable. It bought 3.8bn items at a cost of £1bn from UK manufacturers.

With a total of 5.1bn PPE items used so far, according to the health department, the NAO has warned that the NHS now has a stockpile that could last for years, which “will limit the domestic market that new UK manufacturers can sell into”.

Gareth Davies, head of the NAO, told the Financial Times that ministers must provide evidence they had used money in a way that was “fair and transparent”.

“We don’t have the right connections,” concluded Jan Roby, whose business in Knowsley near Liverpool, has just laid off five staff after failing to clinch a PPE contract.

Family-owned firm Florence Roby had lined up a deal with local trusts in Cheshire and Merseyside to provide 40,000 reusable gowns. But in April it fell through after a huge shipment of disposable gowns arrived from Turkey.

While Roby’s gowns cost about £15 they can be used 100 times, reducing waste and cost.

Ben Fletcher, head of policy at the manufacturers association Make UK, said: “Lots of textile firms and other people who work with plastics were extremely keen to help, registered on the [government] website and haven’t really heard very much.

“There needs to be a much more coherent reshoring strategy in government,” added Mr Fletcher, referring to the policy of building domestic manufacturing capacity instead of relying on imported products. 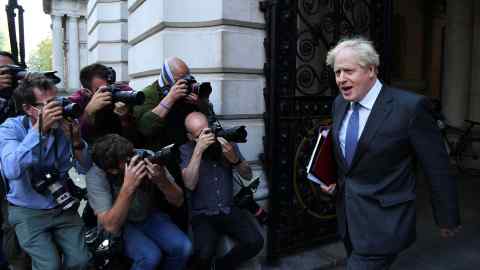 According to 2017 data, textile and apparel manufacturing employs 109,000 (excluding the self-employed), and produces £9.1bn of products. The PPE demand replaced orders lost when retailers shut because of coronavirus lockdown measures and there are fears it could contract sharply next year.

The NHS said it was not mandatory for trusts to buy products through its central supply chain organisation and some chose to source from local suppliers. The government also set up a parallel supply chain during the crisis.

The Department for Health said: “The outbreak of Covid-19 created a significant surge in demand in global markets, resulting in vast increases in the cost of PPE, increased competition and limited supply. As a result, we are both sourcing and shipping stock from abroad, as well as working with our brilliant British manufacturers.”

It said UK manufacturers would be able to provide 70 per cent of the amount expected to be used in England from December to March for all items except gloves. It committed to publish figures without giving a date.